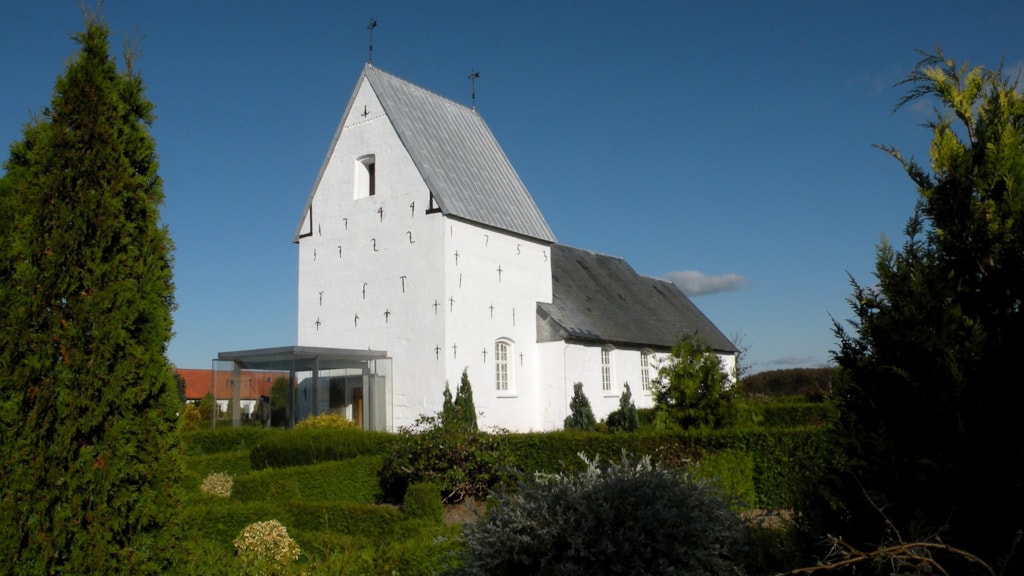 When old and new combines.

Skrydstrup Church was built in the middle ages and later restored in the 1300s. The church is a whitewashed Romanesque church with a late-Gothic tower. The weaponhouse from 2001 is a lovely example of the old and new coming together.

The fixtures of the church include a Gothic alterpiece from the 1500s with two wings. In the center piece is the standing God holding Christ on the cross in front of him, flanked by Mary with child and Mary Magdalene. On the western wall hangs two figures from the 1400s: a sitting Madonna and a warrior saint.

The church was closed by the Germans in 1944 because of the nearby airfield, and the fixtures were evacuated. The church was reopened in July 1945, and you can see a memorial plaque above the tower door.

In 2001, Niels Vium drew a new weaponhouse for the church. The weaponhouse is shaped as a cube and constructed in glass. The decoration consists only of a bench and a sculpture, "Agnus Dei", made by Jette Vohlert. The sculpture depicst an ancient Christian symbol - namely "The Good Shepard", which is one of the oldest symbols of Christ. As John the Baptist says, when he sees Jesus approaching at the River Jordan: "Behold the Lamb of God who takes away the sin of the world."