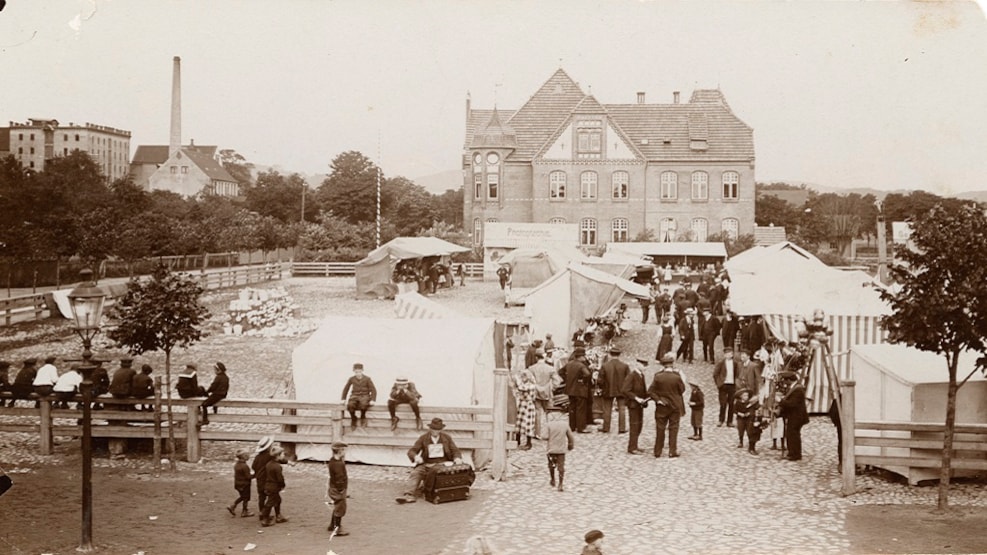 Like the name ”Madevej” indicates the area around the market place was a low situated meadow area leading down to the harbour and the town’s shipyards. The long white building south of the square is the remaining south part of two long houses built by shipbuilder Niels Jacobsen for his workers around 1858.

The war in 1864 brought an end to the united Danish-German state. Denmark was forced to give away the culturally mixed Slesvig and the German speaking duchies Holsten and Lauenburg to the victor. Aabenraa became a Prussian garrison town and in 1866/67 the military started using the northern part of Jacobsen’s workers’ buildings for barracks. At the same time the military bought the low meadow area around the barracks to be used as an exercise square. In 1871 the German Empire became reality. In 1888 the military moved to the newly built barracks in Haderslev and the square was turned into a market place.

Today the bus station is right north of its historic ancestor. North of the new market place the circuit house drawn by building inspector Friedrich Jablonowski was built in national romantic style in 1902-04. The circuit house that today houses private offices is seen as the most important building from the period 1864-1920. When it was erected the markets were still taking place at Store Torv. However, trading horses and cattle was run in the streets and alleys of the town and this was now moved to the new market place. In 2020 the historic market square was renovated as a public square. Every Saturday from 8 am to 2 pm you will now find a wide variety of fresh flowers, fruit, vegetables, fish and cheese from local producers here.